Hi, my name is Phoebe and I am on the BA Drama and Applied theatre in Education course at Central School of Speech & Drama. I am currently in my third year and so have been lucky enough to be on my placement with Gendered Intelligence.

I attended the National Trans* Youth Conference in Manchester, based at the Manchester Metropolitan University. This was a day full of incredible people who identify as trans, non-binary or questioning their gender as well as some working professionals from services such as CAMHS or LGBT youth groups and there was a turnout of around 200 people. 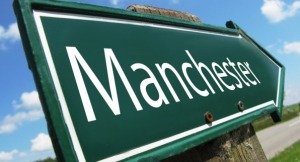 As well as it being a day to increase connections and socialise with other people who may be having the same experiences as you, it was full of sessions providing people with important information which can help to empower young trans people by giving them the knowledge they need as well as inform professionals with information and facts on how best to help the people they work with.

The conference started with an introduction to the day, explaining what some of the sessions would be about as well as how the day would pan out. In the morning some of the sessions consisted of confidence building, how to create a petition, information about trans people’s rights within schools, as well as many other sessions.

After lunch, full of sandwiches, crisps, pasta, vegan and vegetarian friendly food, as well as gluten free food which was so kindly provided, there were some more sessions for the young trans people to attend. These sessions were more creative sessions and consisted of Film making, music, drama, creative writing and others.

I attended the drama workshop, as it is one of my main interest. We had lots of fun making sock puppet scenes, in which our trans sock even dated a crocodile, which I found quite entertaining. I believe that using drama as well as other creative fields is a perfect way to build confidence. Seeing people, previously looking slightly unhappy with a big smile and laughing was probably the best part of my day.

After this session there was a panel discussion in the format of question and answer, allowing the questions of the young people, mainly related to healthcare to be answered directly by working professionals.  This was highly interesting and gave not only me but I believe many people answers to queries that had not been answered previously.

This day was an excellent way to meet other people who identify as trans, non-binary and questioning their gender. It allowed people to share stories and experiences as well as being given advice on how they may go about difficult situations in schools.
I felt lucky to be able to talk to many people and learn so much that I did not already know around the topic of trans identities in medicine and in other aspects of their lives.

I am personally cis-gender, however I love to wear shirts and baggy jeans and I have myself experienced hate because of the way I dress. I believe that with these conferences in place, more people can become educated, which I believe is the start to end hate.

If you ever hear of another trans conference, I would highly recommend going, bringing friends and family to the event. Getting everyone involved will start breaking down the barriers between us.

Thank you for reading,
Phoebe

What a lovely evening we had at our recent 11-15s trans youth group session. 7 young people came to the session, mostly from London or just outside, but one young person came down from Warwick!

We played a name game with juggling balls which ended up involving a lot of running about the room to fetch dropped balls… Er, from bad throws – nothing to do with anyone’s catching skills…! 😉

Then we worked on our working agreement and had some wonderful discussions about including and welcoming people into the group and during sessions, as well as respecting each other, listening, being sensitive around pronouns and opinions shared etc.

After a relaxed break and lots of biscuits and juice, we took some reflective time to draw our own ‘gender timeline’. Here is mine to give you an idea of what I mean.

The young people drew, wrote, discussed with friends to produce their own. Then they shared their stories in pairs and small groups. The room filled with more chatting and lots of laughter at the silly names that other young people have called them at school or incidents when people have got things very wrong even when trying to help! It was a great atmosphere and good to hear the young people share their similarities and find humour in moments that when you are alone can cause more distress.

At the end we closed with a circle of what people had enjoyed in the session as well as thinking of more ideas for sessions going forward. We are going to have a chilled out socialising music and games session as our last session on the 18th of December so looking forward to seeing all 11-15 year olds who identify as trans, non-binary or are questioning their gender identity there!