I got involved with Gendered Intelligence at the end of 2015 through GIVS (Gendered Intelligence Volunteering Scheme). I was welcomed by the inimitable Sasha with their enviable energy and drive, and I volunteered at a couple of events. Public speaking was not high on the agenda at that point.

Jay Stewart (CEO of Gendered Intelligence) approached me in November at a meeting and told me about the panel discussion GI was chairing at the Being A Man (BAM) event at the Royal Festival Hall on Saturday, 26th of November. There was to be a panel of people gathered by GI discussing relevant issues for an hour. The discussion was simply entitled Transgender… which being fairly broad left a fair amount of ground to cover.

I deliver workshops regularly in schools, and am a performer, so talking to a roomful of people isn’t the most terrifying thing for me, but when you’re covering such personal ground it can feel rather different. I knew one of the panel, a trans man who had only recently announced his transition. We’d worked together through an LGBT+ organisation called Diversity Role Models, so it was nice to see a familiar face.

The rest of the panel identified towards the more masculine end of the spectrum, so as a fairly femme genderqueer individual I somewhat assumed the role of ‘wildcard’! The discussion was lively and interesting, and covered so much crucial ground with humour, humility and refreshing frankness.

I had been to BAM the year before, and found the event quite groundbreaking in its inclusive approach.  It was only right that we were there, but I still had to pinch myself as I looked out at a roomful of people who were keen to freely engage with the reality of transgender lives in order to inform themselves.  The festival was a wonderful ‘pit stop’ in life, taking time out of the everyday race in order to make ourselves the best version of ‘us’ that we can be, through education and considered thought.

Hearing stories, asking questions and putting faces to the concept of ‘otherness’, reminds us that we are all ‘other’ in some way, shape or form. Thus proving the fact that to be ‘other’ is in fact one of the most ‘usual’ things that we can be. Just don’t call me ‘normal’ – it doesn’t agree with me!

To sum up, Gendered Intelligence’s Jason Barker (who was chairing the debate) asked a question to the panel that he is often asked in schools: ‘Is there anything you miss about being a girl?’. The rest of the panel had been assigned female at birth, and knew what it was to be perceived in that role. My own experience of being perceived as female was somewhat limited, but a fascinating conversation ensued about how perception of threat and safety (yours and other people’s) is largely based on gender expression, and how gender is a fundamental part of how we move through the world.  Old news to many of us, especially the trans people, but some were facing up to this for the first time and it was a revelation.

About a week later I was at a concert that I had helped to organise for a choir I sing in, The Pink Singers,  London’s LGBT Community Choir.  Whilst setting up the keyboard and sound checking, a teacher came up to me who was there with the secondary school choir who were also performing that night.  Bizarrely enough he had recognised me from the panel at BAM and wanted to say how much he had enjoyed the talk, and how informative and enlightening he had found it.  It was an unexpected coincidence that really made me smile. Proof that sharing our stories does help.  When you consider the knowledge he can now take with him to his work with young people, we can be reassured that the future is getting brighter by the day. 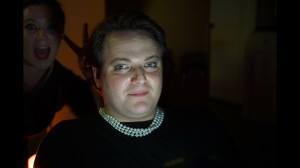