Earlier this year we had three new members of staff join us at GI: Cara as our Policy Engagement Officer; Cathy as our Professional Services Administrator; and Sascha as our Volunteer Coordinator. Check out their bios below to learn a bit more about them! 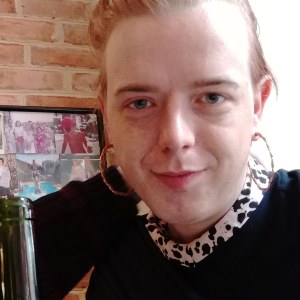 Outside of Gendered Intelligence, she campaigns against funeral poverty with the Fair Funerals campaign.

Since leaving her hometown of Belfast, Cara has worked in Glasgow, Paris, Montpellier and London. She continues to be involved in the campaign to repeal the 8th amendment of the Irish constitution, as well as advocating for equal access to abortion for pregnant people in Northern Ireland. Cara has an MA in Linguistics from The University of Glasgow.

She is interested in intersectional feminism but finds most of her out-of-work time is taken up playing with her beloved rescue dog and writing needlessly intricate recipes.

Cathy joined GI as Administrator for the Professional Services Team in February. She is from the West Midlands originally, studied French and Spanish at Glasgow University and has spent time teaching English abroad in Spain and Italy.

Since moving to London in 2010, Cathy has held a number of admin roles in the voluntary sector, most recently at International Planned Parenthood Federation and before that the National Council for Voluntary Organisations. She has also been a volunteer for Switchboard LGBT+ helpline, Hackney Food Bank and Hackney Winter Night Shelter. She has two tuxedo cats called Jules and Jim who are the best*. Outside of work, Cathy loves musicals, radical history and learning languages.

*The views and opinions expressed in this paragraph are Cathy’s own and do not necessarily reflect the official policy or position of Gendered Intelligence.

Sascha joined GI in February as our Volunteer Coordinator. They are a part of the Public Engagement team and support our events management and fundraising work as well.

They are also involved with our policy engagement work, dealing with international policy matters. They have previously lived in Morocco and Ukraine and have a specific interest in LGBTQI+ policy and queer rights movements in West Asia & North Africa and Eastern Europe.

Outside of their work with GI, Sascha is also the Co-Editor of ‘Beyond the Binary’, an online magazine for the non-binary community in the UK. They were the founder of ‘Breaking the Binary’, the first project supporting non-binary people in Wales. They are also involved in interfaith work, as well as work supporting LGBTQI+ asylum seekers and refugees.